Where I can get my Schindelhauer?

support and guidance at your Schindelhauer dealer

We appreciate that you are interested in buying a Schindelhauer bike and suggest purchasing it at one of our Schindelhauer dealers. They will provide you with personal advice, a test ride and also offer you their best service after your purchase. Here you can find a list of our dealers:

There are two options for you to buy a Schindelhauer bike:

1. online purchase and delivery to a Schindelhauer dealer of your choice (euro zone only):
A preffered choice would be to have your bike delivered to one of our dealers at no extra cost. They set up the bike for you professionally and will have it ready for pickup by arrangement. During your online purchase process, you will be shown the option to select a dealer near you as delivery address.

2. delivery directly to your home:
If you cannot find a Schindelhauer dealer in your area through our dealer search, you can also have your desired model delivered directly to your home. The bike is delivered almost completely assembled. As explained in the manual which comes with the bike, only the tires must be filled with the appropriate air pressure, the pedals and, if included, the frame-mounted front rack need to be attached, as well as the handlebars set straight.

Information about delivery time, costs, returns and accessory shipping can be found on the Shipping Information page as well as our General Terms and Conditions. We are happy to answer further questions via our contact form or via info@schindelhauerbikes.de.

no Schindelhauer dealer nearby?

In this case the above mentioned option of shipping directly to your home will be possible. We are also happy to accept recommendations for future Schindelhauer dealers. If you are a owner of a bicycle shop or a customer of a recommended shop, you are welcome to send us further information via info@schindelhauerbikes.de.

buying and delivery outside the euro zone?

NACA Road has been developed on the basis of a clever projection lens system that allows for a very compact design while providing maximum performance at the same time. The light, which comes from only one LED, is optimally directed, refracted and distributed very efficiently as a homogeneous carpet of light on the road – scattering losses are thus reduced to a minimum. As a result, NACA Road shines brighter than products from other manufacturers despite comparatively lower lumen/lux values (see FAQ).

The surface of the lens body is additionally hardened for external impact and equipped with an anti-reflective coating. A sharp cut-off line prevents the glare of other people in traffic. 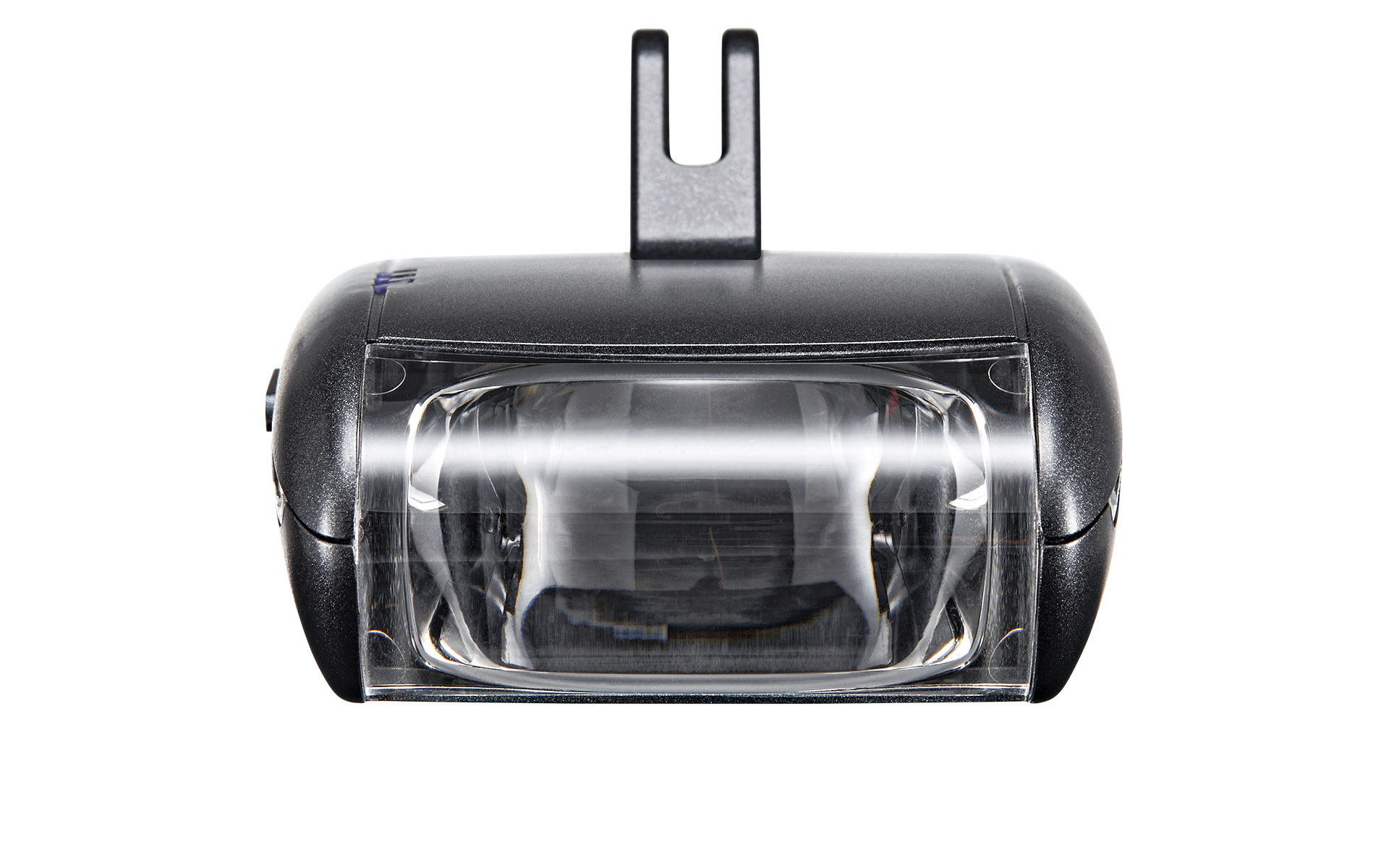 For maximum drag reduction, the design matches the aerodynamic shape of the NACA airfoil. This results in an industry-leading drag coefficient of only 0.267. At 45 km/h, the energy consumed by aerodynamic drag is only 0.48 W. At the same time, the aluminium housing ensures durability and optimal heat dissipation.

Long, intense and fast-paced training rides are now possible even in absolute darkness - without compromising safety. The extremely wide field of vision is reminiscent of car headlights, which illuminate roads and their surroundings evenly over long distances.

The tunnel effect that often occurs when driving at night is therefore not existent. Even in curves, hardly any change of riding style is necessary. 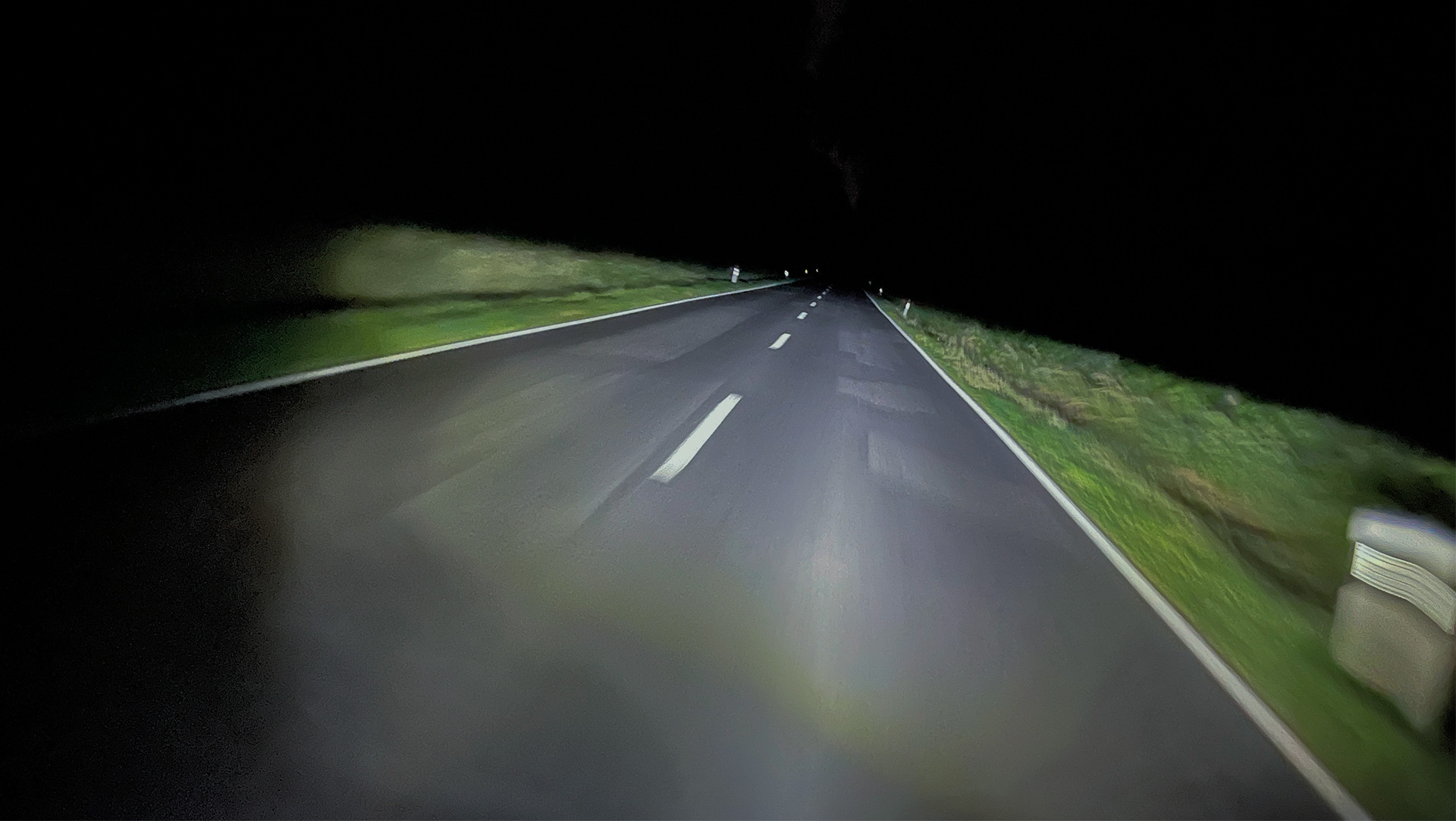 LightSKIN is known for combining the latest technologies with a discreet, fully integrated design to provide the highest possible practical benefit and attractive appearance. NACA Road sets a new milestone for LightSKIN by establishing strategic collaborations with ETENDUE LIGHTING lighting technology specialists in the automotive industry.

Oliver Bridgewood from GCN went to Flanders to take on the Flandrien Challenge, attempting to ride 59 iconic climbs in a single day. To master this legendary region of Belgium, NACA Road enabled Ollie to ride just as safe at night as during the day – and thanks to aerodynamic design with minimal effort.

Why does NACA Road shine brighter than products from other manufacturers despite comparatively lower lumen/lux values?

Lumen is the unit used to determine the luminous flux and provides information about the total light emitted without considering its spread - e.g. spot or wide area. Lux, on the other hand, defines the illuminance at the brightest point, measured perpendicular to the road, at a distance of 10 metres. As with lumens, this value does not indicate how large the actually illuminated area appears. Depending on the test scenario, there may be further deviations, making a direct comparison of products based on lumen/lux values not very useful.

In real conditions, NACA Road thus shines brighter than other headlights despite comparatively lower lumen/lux values, as NACA Road sets new benchmarks in distance and width of the light carpet thanks to the advanced lens system.

Which brightness levels can be selected?

How can I charge NACA Road and how long does the battery last?

NACA Road is charged via USB-C cable ( power adapter or power bank). A full charge takes 2.7 to 3 hours. The battery can be charged at the same time as using the device. Depending on the level set, the battery life is more than 7 hours.

Can NACA Road be used in heavy rain?

Yes! NACA Road is dust/splash-proof according to IP66 and can therefore also be used in heavy rain. Charging (while riding) should not be done in the rain, as the USB-C charging port is no longer sealed by the cap.

Is a mount included in the box?

NACA Road can be installed with any GoPro mount, e.g. below a bike computer (Garmin/Wahoo). Due to different designs of cockpits and individual requirements, there is no mount in the box.

How can I ensure that other road users will not be dazzled?

On a straight track, even in the distance, the cut-off line should still be visible on the road. The beam angle can be freely adjusted on a GoPro mount.